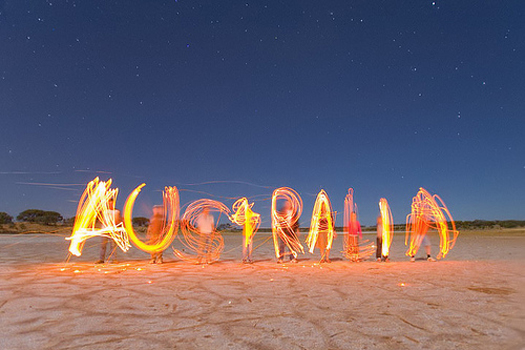 Australia Day is a good opportunity to reflect on what Australia is, and where it is going. Here is what some major papers and thinkers/commentators had to say:

Australian of the Year, footballer Adam Goodes, an indigenous Andyamathanha man, does not see the day, which marks the arrival of English colonists in 1788 and their subsequent seizure of aboriginal land with the establishment of the colony of New South Wales, as predominantly one of national celebration:

because of the sadness and mourning and the sorrow of our people and a culture that unfortunately has been lost to me through generations…We are still here, we’ve got a lot to celebrate about being here and that we have one of the longest-serving cultures still alive and kicking.’

Tim Soutphommasane, in the Age, argues that pride and patriotism should be embraced, but tied to a notion of civic membership which eschews blind loyalty or chauvinism:

In the words of one patriot, ”My country, right or wrong: if right, to be kept right; and if wrong, to be set right.”

On Australia Day I’ll raise a toast to Spooks, Sue, Poe, Shamal and everyone who calls this place home or dreams of a better life here. And I’ll also think about all those who seek to exploit our differences and misunderstandings to divide us. Who can understand their motivations?

Mick Dodson writes that the date of Australia Day needs to be reconsidered, and indigenous Australians formally recognised in the constitution:

Australians would never declare that we should “just get over it” when it comes to the commemoration of the Anzacs. Why, then, should that demand be made of Aboriginal and Torres Strait Islander Australians about the events of a century before that and all that followed? Both should be commemorated, each as surely as the other.

Noel Pearson also writes, in the Australian, about the need for recognition, but only if it is tied to a change in how Australia deals with  policy relating to indigenous affairs:

The Prime Minister, Tony Abbott, yesterday publicly came out in favour of formally recognising indigenous Australians in the constitution.

And, bringing up the rear, Andrew Bolt, at the Herald Sun, is appalled at the choice of Adam Goodes as Australian of the Year, and has written a piece titled ‘Man Honoured After Yelling at 13-year-old Girl’, in which he supportively cites a reader who rails at the ‘racism industry’:

Only by reducing two individuals to racial caricatures – a repentant 13-year-old girl into a white racist and 34-year-old champion footballer into a black victim – could you see in that public shaming a “ magnificent demonstration of character and compassion” worthy of an Australian of the Year. (I do note, however, Goodes was honored for more than this incident alone.)

Reading over this list, it strikes me that only one of the people I have cited is a woman. I went back to several news and commentary sites to find more op-eds and columns written by women about Australia Day, but came up with nothing. I’d be very happy to amend the above if anyone can point me to something worth reading, but for now this post can perhaps serve as an overview of thinking about Australian identity as well as (unintentionally) highlighting the extent to which the Australian media view serious commentary about national affairs as the preserve of men.