Almost Everything in ‘Dr Strangelove’ was True 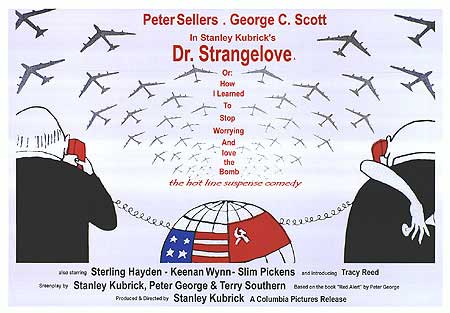 Eric Schlosser previews his new book about nuclear weapons in the New Yorker. It turns out that Dr Strangelove was pretty much on the money:

A decade after the release of “Strangelove,” the Soviet Union began work on the Perimeter system—-a network of sensors and computers that could allow junior military officials to launch missiles without oversight from the Soviet leadership. Perhaps nobody at the Kremlin had seen the film. Completed in 1985, the system was known as the Dead Hand. Once it was activated, Perimeter would order the launch of long-range missiles at the United States if it detected nuclear detonations on Soviet soil and Soviet leaders couldn’t be reached. Like the Doomsday Machine in “Strangelove,” Perimeter was kept secret from the United States; its existence was not revealed until years after the Cold War ended.